On my recent Hebridean Way jaunt I was lucky enough to have, in a small but not unappreciated way, a kind sponsor. I’ve several times on Twitter expressed scepticism as to the cost-effectiveness and palatability of freeze-dried camp meals, and wondered aloud (well, atweet,) why anyone bothers with them. Noticing one of my intemperate Tweets on this subject, the kind and good-humoured folk at Summit To Eat sent me a few samples, hoping to convert me. 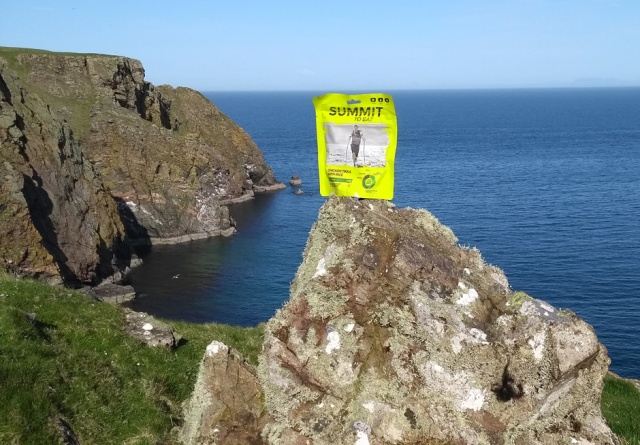 StE is a brand of European Freeze Dry Ltd, Preston, Lancashire, my ancestral county, which probably explains their twinkle-eyed generosity. I’d like to declare immediately and unequivocally that I’m a perpetually peckish oldie and anyone who gives me free food is my friend for life. Also that other ancestral counties are available.

Conscientiously, I lugged these things all the way to the Outer Hebrides where, contrary to rumour, there are in fact perfectly normal shops so I could have managed the trail without them. Nonetheless they were, for me, an intriguing new departure in camp cuisine, so I was looking forward to trying them. Spoiler – with one exception I enjoyed them very much.

Let’s consider whether these things represent good value, in terms of calories, carry weight and cost compared to my default camp meal. These calculations will apply to pretty much any freeze-dried meal, they’re mostly pretty similar in weight and nutritional value. Further down I’ll reveal what I thought of the actual meals I tried, thoughts which will obviously be specific to this brand.

Here’s my default camp meal. Obviously I don’t eat exactly the same food every single night, but this is the meal I eat more than any other so I’ll use it as a benchmark. I’ve actually been known to eat this for breakfast. 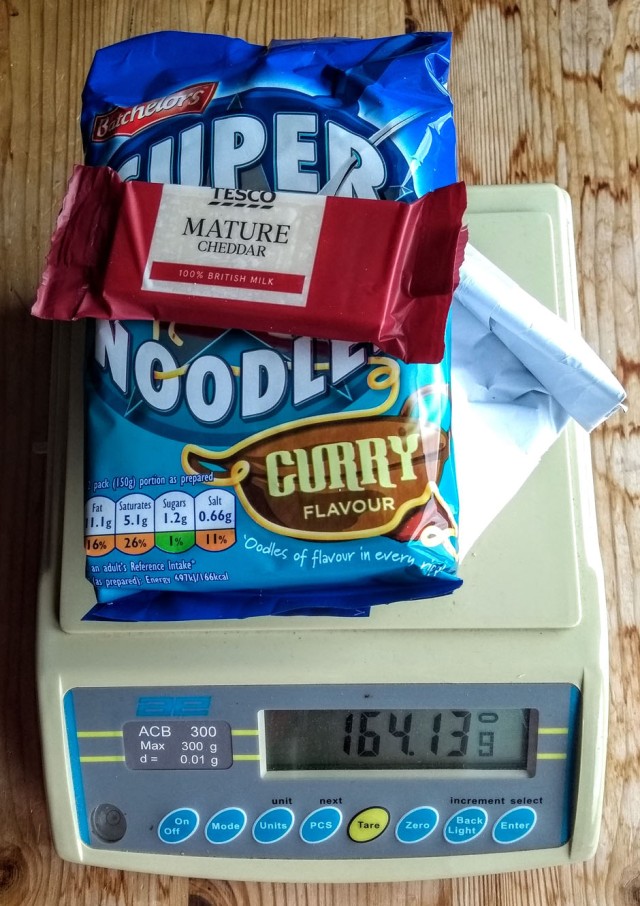 Super Noodles, half a packet of instant mashed potato and a pic’n’mix cheese. Weight about 165 g.

By the way, I strongly prefer the Vindaloo Super Noodles but these aren’t widely available. The cheese is normally a BabyBel as that’s all you can find in remote village shops. These weigh a couple of grams more than a 20g cheddar and deliver 20 fewer calories, would you believe. So, working on an average pack weight of 165 g this meal delivers about 730 calories, 18 g of protein and 30 g of fat (numbers are rounded). Even with a slightly less calorific BabyBel that’s per 100 g of pack weight around 440 calories, 11 g protein, 18 g fat. The cost of this meal last week in a supermarket was £1.25 (80p noodles, 20p spud, 25p cheese). Expect to pay £1.50 – £2 in a remote village shop.

Notice it’s the pack weight (gross weight) I’m interested in, not the net weight of food product. I’m a backpacker, I want to know what I’ve got to carry. As a rule of thumb I never carry anything of less than 400 calories per 100 g for any distance, unless it’s a really good pie I’m going to eat fairly soon. As advised by Ronald Turnbull in The Book of the Bivvy, I do my healthy eating in shop doorways. I also carry vitamin C tablets which I’m convinced help blisters and other small wounds to heal more quickly, although I’ve no factual knowledge of these matters.

In case you’re wondering, here’s the recipe: in the feeble glow of a miniature headtorch, heat 2/3 of a titanium mug of swamp water until visible active life-forms are discouraged, add noodles and curry gubbins. It should be pretty wet, like noodle soup. When noodles have softened, add instant mash and crumbled cheese. Stir with a grubby stick until gluey. Eat like a wild animal, with appropriate noises. Listen, we have to have some kind of fun when we’re dossing all alone in a benighted swamp in the middle of nowhere.

Talking of fun, consider a grown-up freeze-dried meal instead: 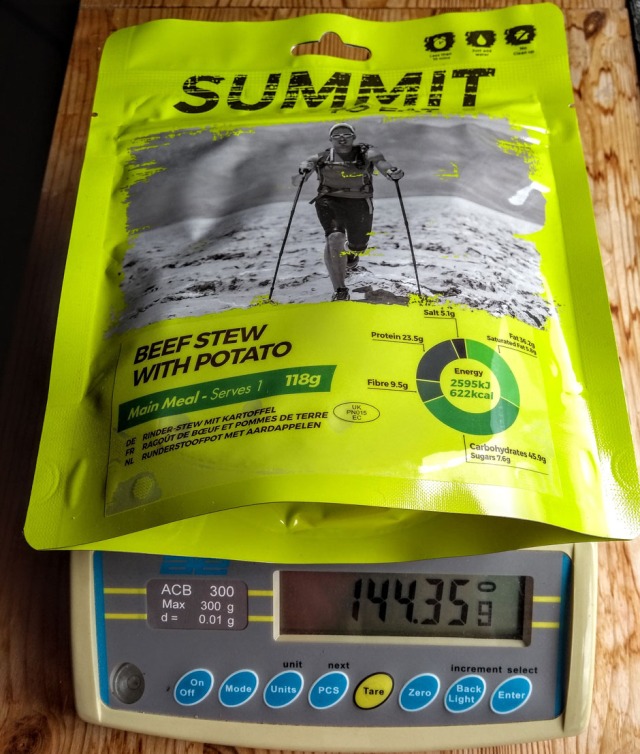 As you can see the claimed weight of this Beef and Potato Stew is 118 g, but this is the net weight of actual food. The pack weight is about 145 g – one thing that’s always put me off these meals is the strong, substantial and hence heavy packaging necessary for their long shelf life, an extraordinary seven years in this case. The whole caboodle, though, is still 20 g less to carry than my standard meal. However it delivers over 100 fewer calories – about 620 as opposed to about 730.

The other per meal figures you can read on the pack, per 100 g of pack weight they equate to 428 calories, 16 g protein, 25 g fat. Quite a lot more protein and fat as you can see. The big difference is the price which although you’ll sometimes find discounts is normally £5.50, i.e. as much as £4 more for 108 fewer calories and only 20 g less pack weight compared to my benchmark camp meal.

OK, let’s think about pudding. Yay! One of the best things about backpacking is that you can live entirely on puddings for an entire trip and no one’s any the wiser. Generally I follow my cheesy noodle glue with curry-flavoured cocoa, if I have enough water and can be bothered with further reducing my karma by boiling more life-forms (think Mexican, or masala choco-chai). This washes down a couple of nutty sweetie bars, as below: 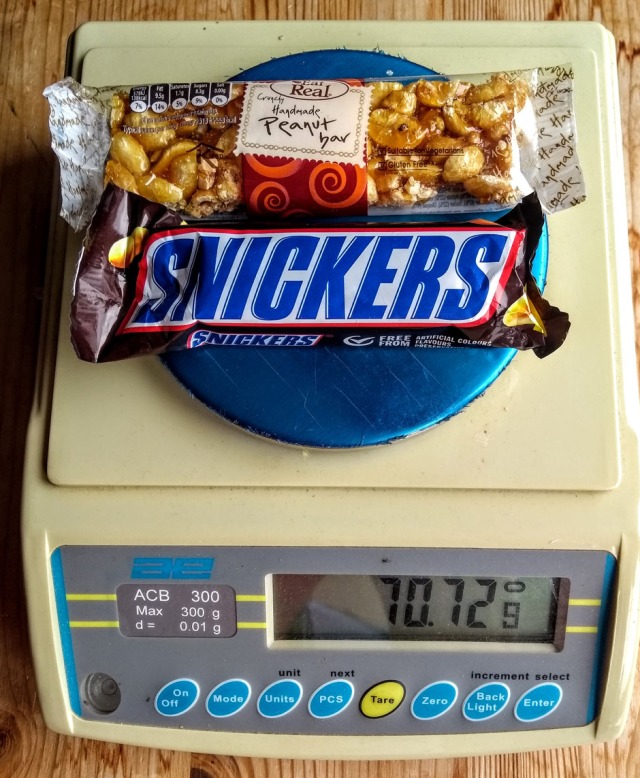 So, by the way, my benchmark camp meal delivers about 1080 calories and 26 g protein for just over two quid and a total pack weight of no more than 240 g, even including a zip-lok bag to prevent the instant spuds from mysteriously turning into wallpaper paste in my rucksack.

In comparison, we present (drum roll) – chocolate mousse! Yes, by some implausible pixy miracle of freeze drying, chocolate mousse!! What on Earth can it be like? Either way, it weighs 121 g for 416 calories, other data on packet below. The cost is a slightly alarming £4.50. 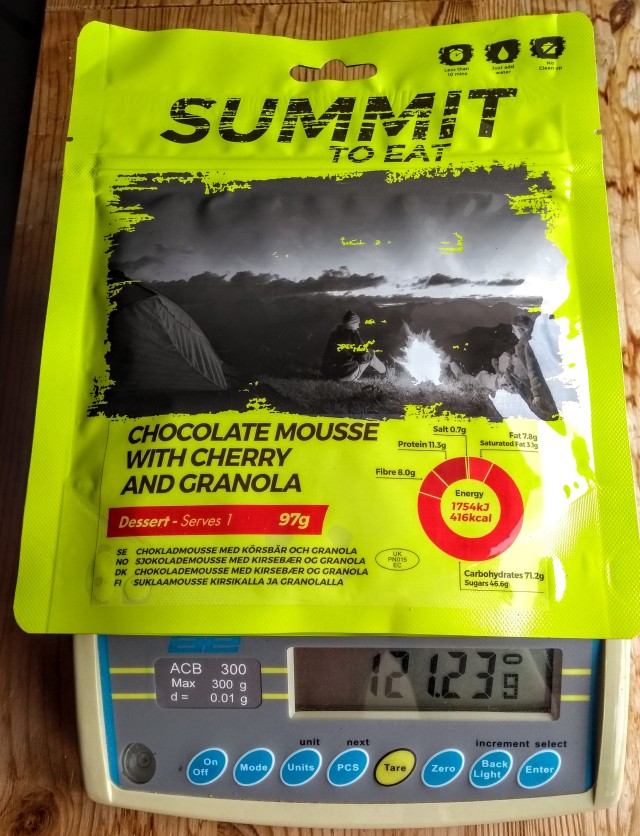 So – per 100g pack weight that’s 344 calories, 9 g protein, 6 g fat. In comparison my benchmark candy bars give per 100 g pack weight 494 calories, 11 g protein, 30 g fat. Peanuts are things of power, if not beauty, and of course let’s not think about the food miles. A better alternative from that point of view is Lidl’s Fin Carré whole hazelnut milk chocolate at an impressive 584 calories per 100g, as opposed to 510 for Snickers. That’s more even than the peanut brittle at 578. Chocolate bars are less bombproof in your pack though.

So the chocolate mousse costs around £3.50 more than my (completely arbitrary) benchmark and weighs 50 g more, but delivers 65 more calories. Notice though that it’s below my (completely arbitrary) threshold of 400 calories per 100g pack weight for long distance carrying. Another slight issue with these puds is that they are cold, so you need clean drinking water to make them up. Obviously you don’t encounter this limitation with candy bars.

‘But enough of your cockamamie figures’, I hear you cry, ‘tell us what freaky freeze-dried chocolate mousse can possibly be like!’

I kid you not, it’s gorgeous. Absolutely delicious. Here it is made up, in a hobbit house somewhere on North Uist, slightly out of focus due to a Hebridean hoolie shaking the tenuous foundations of my compact and bijou abode. 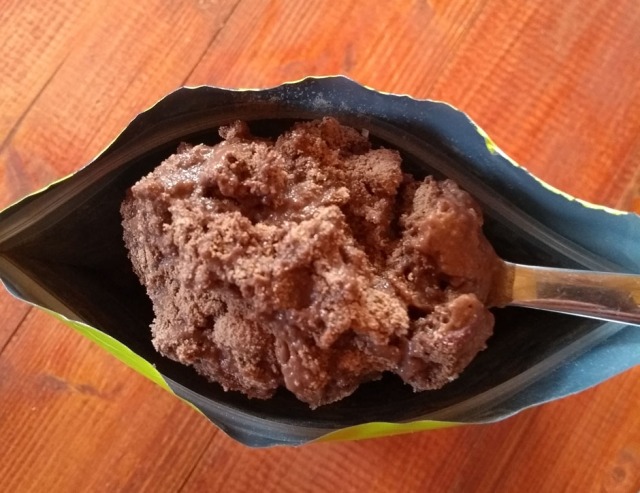 Seriously, I can hardly tell you how much I enjoyed this chocolate mousse. Not only is it super-chocolatey it has detectable bits of granola that have by some miracle stayed crunchy, and detectable cherries that are seriously cherry-flavoured. This may be a personal oddity but very often on a long trail I do find myself craving something cool, creamy and chocolatey. This was just right. I was alarmed by the whole concept of dried mousse, fearing the sodium bicarbonate that makes the bubbles when you add water would give an off-flavour. They must have put in just the right amount, as you can’t detect this at all. A total hit, I would buy this to keep in the cupboard at home and eat as a cheeky TV snack.

I’m sorry, nice Summit to Eat people, I wish I could say the same about the Custard Apple Crunch (121 g pack weight, 447 calories). It was a struggle to finish this, even after a long hike. I’m afraid it put me in mind of some apple crumble and custard that somebody else had already eaten, several days ago. I’m sure this is just a personal preference. I hear there are folk who don’t like chocolate but do instead very much like cold custard with chewy but quite fruity bits of dried apple and crunchy nubbins lurking in it. I’m afraid they don’t live in this house. What I will say is that, like all StE meals, this contained no weird unrecognisable ingredients, only familiar home larder stuff. Praise indeed is due for that.

The Chicken Fried Rice was OK, despite containing garlic, ginger and ‘teriyaki sauce’ the flavour was unassuming. Although I followed the instructions carefully I may not have rehydrated it for long enough as the texture of the chicken was dry and papery. What did impress me was that I could detect the slightly caramelised flavour of something having been actually fried. Overall, this was pretty much how I expected a freeze-dried meal to taste, so no disappointment.

The Beef Stew with Potato I hugely enjoyed. It had a clean, home-made flavour with clearly detectable white pepper, as per the very short ingredients list which again comprised only familiar domestic foods. Freeze-dried potato is always a bit odd, the texture is if anything more like fried tofu, but I happen to like fried tofu so no complaints. There was a generous quantity of beef which rehydrated beautifully and what struck me was that each small piece of meat had been very carefully trimmed, there wasn’t a single dodgy bit. A hit, I’d buy this.

The Chicken Tikka with Rice was amazingly soupy even though I’m sure I put the right amount of water in it. Nonetheless it was absolutely delicious, I enjoyed it enormously. The chicken pieces rehydrated perfectly (which made the oddness of the meat in the Chicken Fried Rice more surprising) and the curry flavour was sparkling and true with a nice refreshing acidity from lemon and yoghurt. All the ingredients were recognisable. Again, I’d happily buy this to keep in the cupboard at home as an emergency late night snack, let alone for camping. 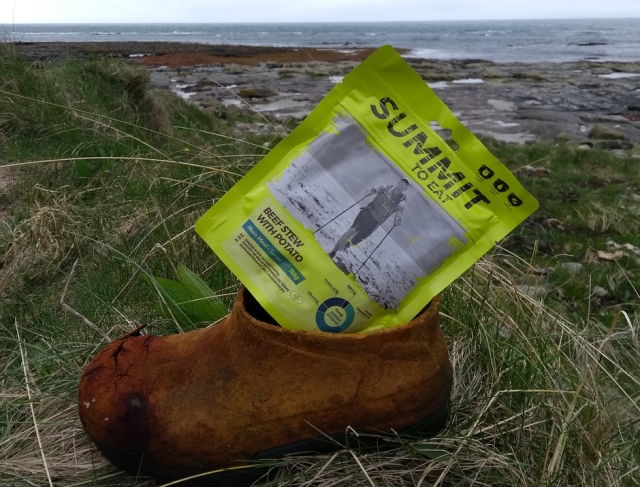 One final, if trivial, thing I would like to say about these meals is that the picture on the main meal packets is more likely to put me off than entice me. That guy (?) looks to me like he’s having no fun at all. I do NOT aspire to be him, or like him. Whatever he chooses to suffer, possibly including his food, I want no part of. Other freeze-dried food packs have reassuring pictures of delicious-looking food, a strategy I commend to Summit to Eat when they next re-design. The picture on the puds is much more comforting.

Am I converted to freeze-dried camp food? Hmm… Part of the fun of backpacking, for me, is to eat weird food I wouldn’t eat at home, not to mention sampling as many local pies as possible. And these meals are much more expensive than my normal fare. Suppose, though, you camp on a notable summit, on a Saturday night, say, and you feel something a bit better than noodles would be appropriate, maybe with a tin of beer. Or two.

Suppose, too, you compare the prices with eating in a pub. I think we can start to see how these meals might offer an interesting ‘third way’ in trail nutrition. In the UK one is rarely far from a bacon butty or chips and so I certainly wouldn’t carry a full roster of these meals for something like the Pennine Way. However I’d definitely consider them for single night or for weekend hilltop wild camps and I’d buy and carry the Beef & Potato Stew, the Chicken Tikka Masala and the Chocolate Mousse even for a long trail. That’s if I don’t eat them at home first.