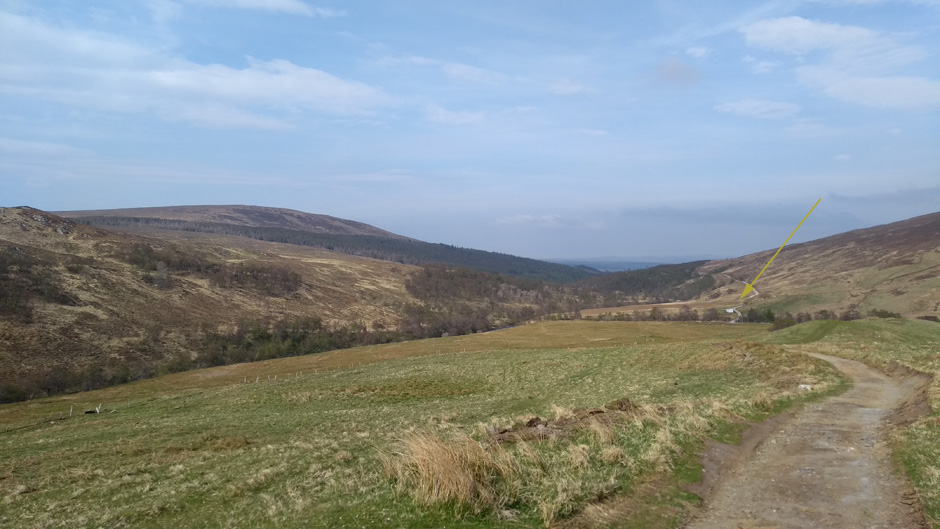 Looking back to An Teallach

Arkle, from the old shieling.

Appalling peaty displeasure, looking back down the Oykel from Am Bealach, and in failing light. Even in dry conditions, this short section is is some of the worst going on the Cape Wrath Trail.

This may be Lochan a Choire Ghuirm, goodness knows…

The view is quite quickly amazing.

…and becomes more so. Eas a Chual Aluinn waterfall in far distance.

…even a little exposed

Loch Feodach Coire. These lochs may be in the wrong order but, hey, it was 5.30 am…

Not much further to slither now. the largest building (centre) is Clachan kirk.

Looking back to Clachan (farmhouse arrowed) from Inverlael Forest. An Teallach behind.

Appalling peat hags and groughs at the foot of Am Bealach, Conival above.

High as a high thing…

A brief rest in Glencoul Bothy

Glen Douchary to the south.

Glen Douchary to the north-east.

The ruined sheepfold near the river (C on Iain Harper’s map, page 122).

According to the farmer, this massive burn was caused by backpackers wild camping and took every fire engine in the north-west highlands “pumping the river nearly dry” to control. How embarassing.

The Gascons are crossed with Limusins (? – I think he said) to produce these pretty calves.

Approaching the farm in Glen Oykel

The chilly Slow-worm, rather vulnerable in the middle of the trail.

Everyone knows Scottish deer are extremely shy and can only be seen by hiring at great expense canny local stakers in appropriate fancy dress. Except when the deer are on your lawn…

The front lawn at Inchnadamph Hostel. In the background, tents (and a bivvy bag) of those who missed the last bed.

Another confusing lochan. Or possibly the same one, don’t ask me.

The really rather good campsite by the River Laxford.

Milkwort, lots of this on the hillside above Clachan

The first of the subsequently numerous Heath Spotted Orchids Dactylorhiza maculata that adorn Assynt and Cape Wrath in early May.

The top of this waterfall is the lowest point at which you must cross to the east bank. I suspect Harper’s higher crossing is safer in wet conditions.

The River Douchary – not always as easy as this to get across, I’m sure.

The Old Schoolhouse bothy at Duag Bridge (I haven’t cheated and acquired a bike, that’s Fionn’s)

The old sheepfold at Knockdamph, its inwardly sloping corners giving a strtange Mesoamerican feel. Not that I’ve ever been to Mesoamerica.

All I have to do now is jog towards the sea, and that will be Inchnadamph…

The Allt na Lairige, from a sensible distance.