Tucked into my nook at the north-west corner of Mynydd Cilan I enjoyed a pleasant and peaceful night, despite overlooking the fearsomely-named Hell’s Mouth.

Quite a pretty spot, if only some scruffy travelling type hadn’t spoiled the view with his campsite.

The weather had brightened and, enlivened by the thought of coffee and breakfast, I stomped off early. Considering Abersoch was only 3.5 km from my campsite as the Chough flies, reaching it took a bafflingly long time. This was because, as correctly shown on the OS map, the trail winds for more than 10 km of clifftops all the way around the edge of Cilan Point (a legendary fishing spot, I’m told, for Bass, Bull Huss and even Tope), above the beach at Porth Ceiriad and around the headland with two little ears that looks out at St Tudwal’s islands. A lovely walk in summer, I expect. 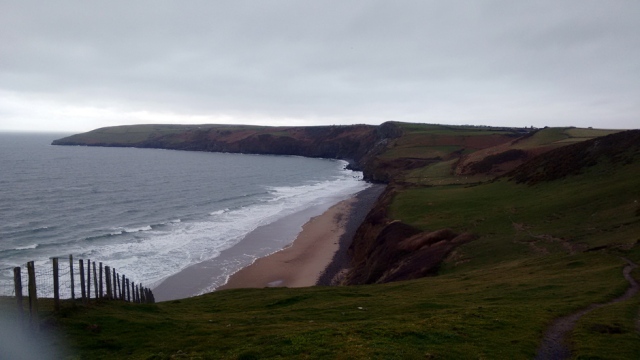 Mist descended and it started to spatter intermittently with quite heavy rain. In cold drizzle at Machroes, surely one of the wettest places in Britain, I encountered a trail runner with about five litres of water strapped uncomfortably to his scantily-clad person. ‘Training for the Marathon des Sables’, he explained. ‘Enjoy’, I said, ‘is there a café open anywhere?’ Crossing the golf course I saw two more Choughs feeding on a green. It seems that Choughs like golf, even if nobody else with any sense does.

Talking of nonsense, Abersoch is too posh for cafés, one is forced reluctantly to patronise establishments called ‘Deli Gin Bistro’, ‘Fusion Smokehouse Gelateria’ or ‘Artisanal Absintherie and Kitchen’. I didn’t need a kitchen, it wouldn’t fit in my rucksack and anyway I have one at home. I’d been hoping for just a mug of filter coffee and a bacon buttie. I tried the simplest-looking sandwich bar but for hot food was directed next door to Zinc, an unfeasibly noisy place that appeared to be rammed full of off-duty Lady Gaga impersonators and their dance teachers.

The staff reacted exactly as you’d reasonably expect them to, on seeing a man splattered with mud from the knees down attempting to ram a rucksack the size of a full-grown sheep, from which water was visibly seeping, underneath one of their bijou and tightly-packed tables. That’s to say they were professional, but detectably unenthusiastic – I quickly gave up hope of charging my phone and almost as quickly left. I followed the trailmarkers out of town. These led me in a small circle around a headland infested with houses off Grand Designs, dumping me right back in the High Street exactly where I’d started from. Well, really. 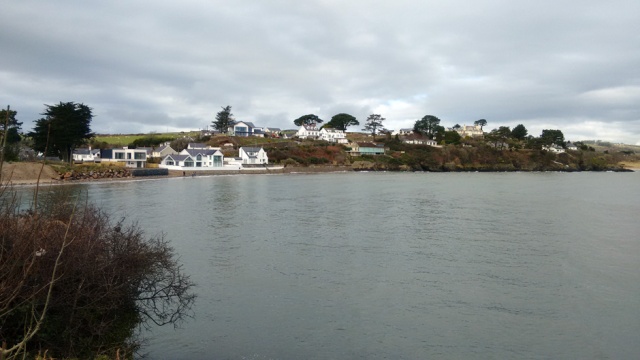 Just a few of the rather swish beach houses at Abersoch.

At this point, my phone having definitively expired, I decided to buy a map. Nothing as primitive but actually useful as a map was for sale in Abersoch but a kindly chap in one of several shops selling mission-critical surfwear pointed the way to Pwllheli, along the main road and completely unwaymarked. The signage, when eventually it restarts, is confusing. You ‘can’, it says follow the coast path along The Warren beach, leaving open the idea that there might be some more sensible alternative but failing to spell out what that might be. I walked along the beach, and a long and splendid beach it is too, although a little over-civilised.

So much so that halfway along it there’s an actual beach bar, as if this was Goa or somewhere. Amazingly in the mist and drizzle of early March, it was open and in consideration of my buying a coffee and a shot of JD its young, hip operative kindly put some charge on my phone. A good job too as at the north end of the beach I was apparently faced with not only wading the briny ocean but then scaling a vertiginous cliff in a Where Eagles Dare stylee.

Tan-y-mynydd, which at anything other than low tide is somewhat impassable.

A scrappet of battery revealed that I should have turned left a couple of hundred yards back, hairpinning back up Mynydd Tir-y-cwmwd. Then that was my lot for digital mapping. Luckily, slithering down through the woods above Llanbedrog, I stumbled upon the beautiful arts centre at Plas Glyn-y-weddw. The nice-looking café was packed and anyway I couldn’t justify stopping again, but on nosing into the delightful house, where decent people in clean clothes were recuperating by the lovely woodburner from the effort of driving their Volvos along the track, I spotted a gift shop with a rack of guidebooks. ‘I don’t suppose you have an OS map of the Llŷn?’, I asked, dripping steadily onto some of Wales’ most lustrous parquet, ‘and I’m sorry I’m still not sure how to pronounce it’. ‘I don’t know either’, said the lady in a conspiratorial whisper, ‘I’m not Welsh, I’m only a volunteer’.

Looking back along The Warren towards Abersoch.

Armed with my new map, new-found confidence and a cunning plan, I positively bounded off along the long beach then the interminable dunes into Pwllheli, through which I navigated with papery aplomb, agog at the shops – there’s even Lidl! It was only just gone four but I was hungry and as the plan involved spending that night in a plastic bag in unknown weather on a random hilltop (cunning, huh?) I figured I’d better stock up. One of the great things about travelling alone is that if you fancy a doner kebab at four in the afternoon, who’s to gainsay you?

Well, the staff in Nana’s Kebabs looked a little surprised, but their regular doner was one of the biggest piles of crispy, wafer-thin meat I’ve ever seen, goodness knows what a ‘large’ doner is like in Pwllheli. I ate half and put the rest in my rucksack for tomorrow’s breakfast. Nourished and navigationally enabled, I headed north out of town, making for what looked on the map like a completely straightforward public footpath across farmland. My plan was to see how close I could get to the hills. My hope was perhaps to make it all the way up to Tre-r Ceiri and bivvy out at the hill fort, with only bronze age wraiths for company.

Disappointingly, the route north out of Pwllheli must be one of the most neglected and derelict public rights of way in the British Isles. Signage was nonexistent, this was a compass job. Barbed wire abounded – climbing over some I tore my much-loved and not inexpensive Berghaus Paclite overtrousers, one of my few gear-buying successes. Correct routefinding was occasionally indicated by rotted and collapsed ladder stiles, lying in heaps in the corners of swampy fields where they’d been replaced by – more barbed wire. Going was absurdly slow, across several fields I was paddling. It got dark. With nowhere to pitch a tent I achieved my ambition of testing my new bivvy bag, but rather than on the planned airy hilltop I only got as far as a swampy roadside wood. I was behind a stone hedgebank and it was a quiet spot – just two vehicles passed all night – so I lay down feeling smug, if somewhat claustrophobic. The only sounds were some strange rumblings caused by Nana’s chilli sauce and the unearthly screams of a Little Owl. Not long after dark, it started to rain. Heavily.

Suffice to say my first night of bivvybagging was appalling, although between downpours I did see quite a few shooting stars. I use the word ‘see’ loosely as I’d taken my specs off in the hope of actually sleeping. For long periods I was forced by the rain to put my head inside my glorified bin bag – it’s surprisingly hard to sleep with drops of water pelting onto your eyeballs. This meant that as I was sheltered from any wind, inevitably the thing filled with condensation. The rain eased off before dawn and I awoke wetter inside my bag than outside, several cupfuls of water wet, it literally poured out. Had I been in a down sleeping bag on a cold night I’d have been in trouble but having learnt all about damp down on the Pennine Way I’ve upgraded to synthetic; the inside of my new sleeping bag was dry and I’d been perfectly warm enough all night, but my first bivvy wasn’t an experience worth prolonging unnecessarily.

Just past where I’d bivvied I spotted my dream house at about 376 391, a totally derelict traditional cottage more or less hidden within a large wooded plot, and up for auction. (The guide price was £30-60k, it sold for £114k; auctioneers Morgan Evans were so pleased with this they’ve put a video of the sale on Facebook). Disappointed by bivvying as a lifestyle concept and fantasising about off-grid hovelling instead, I blundered through the dawn light which seemed to be not so much rosy-fingered as grey-fisted. It got darker instead of lighter, what was going on? It started to snow.

I stumbled through two hours of snowstorms along implausibly derelict paths. At about SH 376 419 there’s a beautiful and completely isolated chapel, unmarked on the map, surrounded by an atmospheric graveyard. The bridge over the surprisingly deep river at about 379 419 is hard to spot but vital. Mynydd Carnguwch was completely hidden in the blizzard, I contoured round the track to the B4417 where I found The Rivals were similarly obscured. I hunkered under a larch tree by the roadside and ate cold doner kebab. Snow falling through the needles into my shredded lettuce contrived a sort of Japanese chilled seaweed soup effect, enhanced by onions and lamb grease. It was ridiculous.

Trudging down to the main road, I figured I’d make up for having weedily allowed myself to be driven to Trefor on the way out by yomping back 14 miles to Caernarfon. By Clynnog Fawr the snow had stopped; looking back the hills were now invitingly visible and both my feet were hurting. The experimental boots, the faster pace and the road walking were ganging up on my toes in some deeply unpleasant way. At the very welcome and friendly self-service café in the petrol station I took my experimental boots off and found them both experimentally filled with blood. I bought another coffee, then limped to the bus stop. Adventures, eh?

← Llimping round the Llŷn – 3.
Bivvy Forgiveness →