…in which after an amphibian breezy night I sample cheesy delights and randomly see the sights.

Ignore a comedy sign claiming it’s two miles to the hostel. See that house up on the left? That’s the hostel.

Hawes is a lovely town with everything a Wayfarer needs, apart from an inflatable sleeping mat although I did find a skinny CCF mat in one of the two outdoor shops. The Spar has a great selection of convenience and camping foods and you’re spoilt for choice of both accommodation and catering. I stayed at the nice traditional Youth Hostel for an absurd seven pounds (with members’ discount); you can pay more than that to camp.

Leaving Great Shunner at dawn I arrived before reception closed at 10 and so had the run of the place all day, sorting my gear, drinking coffee, washing clothes and drying everything in the large, efficient drying room. By the time I’d visited The Creamery of course for a cheesy lunch then done the shops, it was time for tea, buns and the papers back at the hostel which has all day key code access. I enjoyed a perfect fish supper just down the road at the imaginatively named The Chippie and a perfect pint of Landlord at The Old Board.

Marvellous pies (and much more) in the Spar Shop. 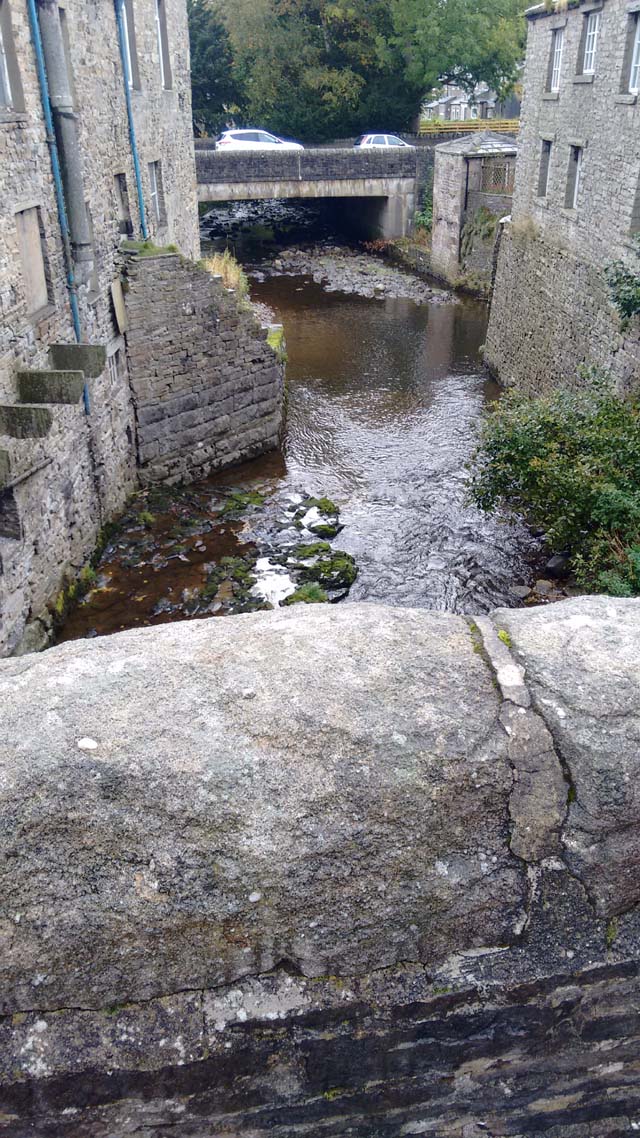 Either bridge takes you into the town (or, if northbound, out of it).

The summit of Great Shunner Fell is quite frankly a rubbish campsite, uncomfortable and exceptionally exposed. It’s only worth braving if the weather forecast guarantees a view, in so far as such a guarantee is even possible on The Way, and even then it’s only for experienced eejits with good gear and a Plan B.

Not the most cunning camping plan.

After a bogtastic night I was damp as a lamprey and twice as slimey. I couldn’t wait to get my aquatic backside off that fell, and I took steps to do so before the sun rose.

The path down Great Shunner Fell.

The sky changes quickly up here, possibly something to do with the wind!

Quite apart from the bog issue and the thankfully intermittent but tediously repeated visits of the King Of The Hoolies, my trusty old Thermarest had developed a large lump in the middle, as if a champion marrow had somehow sprouted inside it. What with the tussocks as well, it was like trying to sleep on top of a swamp anaconda that had swallowed a small but lumpy capybara.

As the sun rose over Little Shunner Fell and my left shoulder the autumnal sedges glowed orange, as if the moor was aflame. The light had a milky quality, unless my eyeballs were cheesily anticipating The Creamery.

Hawes hostel must be one of the nicest and most traditional in the remaining YHA network, I can’t believe I’ve never stayed there before.

It was custom-built partly to service The Way during its heyday in the 1970s, and with taxpayers’ money to boot. Convenient, with good facilities and astonishing value for money, it’s well worth supporting. My search for a replacement sleeping mat was less successful. The choice was between a skinny 5 mm CCF mat or a hugely heavy car campers’ LiLo, the kind of industrial grade airbed we used to paddle about on in the sea during sixties beach holidays, though of course that’s much too dangerous for children nowadays. I went for the CCF, which I suspected would be too thin for The Way in October and on Bleaklow I was to be proved right. I consigned my Thermarest to the hostel rubbish bin. Bought in 1999, it had managed two and a half Pennine Ways and many other adventures, the poor old thing, before expiring. I knew how it felt.

The Creamery was amazingly busy with several full-size coaches disgorging hordes of passengers into the cafe and into the extensive retail opportunities. It’s wonderful to see a youngish business producing quality British food so imaginatively and successfully.

The cheese they make is of unimpeachable quality and flavour, absolutely superb in fact even though (stage whisper) I slightly prefer Cheshire to Wensleydale. Having said that, I particularly love any cheese made from sheep’s milk. The ewes’ Wensleydale here is a world class cheese experience and with great provenance too, of course. 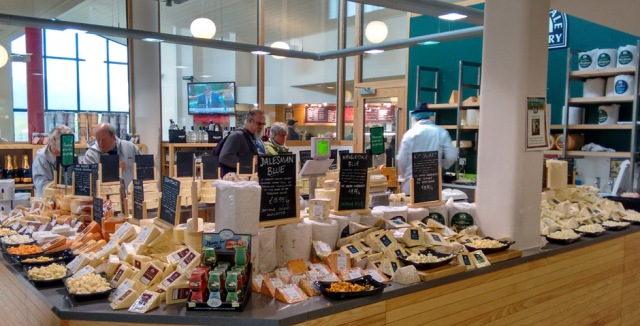 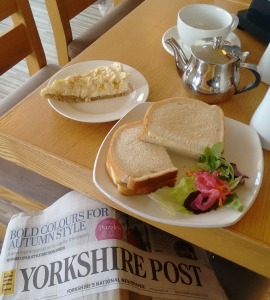 The Fish and Chip Special in The Chippie was a very reasonable £8.50, I think, for a huge portion of cod and chips with peas, tea and a slice. More to the point it was freshly and perfectly cooked and by some of the slimmest and trimmest pan wranglers I’ve ever watched in action. The woman on fryer duty looked as if she runs up and down Great Shunner before each shift and, this being Yorkshire, she probably does.

All in all, Hawes is a grand day out and a perfect day off, although of course I did hike almost seven miles before finally stopping here. Having already completed the Pennine Way just four months previously, I’d retained some hill-fitness. Those attempting their first Way of the season might prefer a proper pack-off rest day at about this point.

The Fish and Chip Special – fabulous!