…in which I test legendary berries, festoon a tearoom with wet polyester and dress up as a chimerical caterpillar.

Middleton-in-Teesdale is a proper town with everything to sustain civilised life. I had a marvellous lunch of homemade corned beef pie in The Conduit, a friendly place where I had the upstairs room to myself and so aired my tent across the backs of all the chairs. (In September 2018 this had changed hands and been renamed The Tees’ Pot. there was still pie on the menu but I can’t say if it’s still as good).

They keep a Pennine Way logbook here, these are always fun to read and scribble in. Having learnt my lesson to turn left over the bridge instead of being lured right to the Co-Op, a visit to the estimable McFarlanes’ butchers topped up my pie stash. Their pork and apple pies are one of the best snacks on The Way. (September 2018 – the pork and cranberry is pretty good too!)

A cornucopia of awesome pies at McFarlanes

At Grassholme reservoir there was a portaloo in both June and October but don’t be tempted to indulge in any water sports, will you?

It was a relief to see from a pinned notice on the door that apparently the Clove Lodge bunk house was still available (October 2016). I was sorely tempted, but this was the Perverse Pennine Way. (In September 2018 this notice had gone and the bunkhouse looked closed). (Update Spring 2019 – the word online is it may be open again).

The Way does not pass through Widdy Bank Farm. I had no problem with this south to north but I inexplicably forgot going north to south! If you find yourself walking past the Natural England office you’re too far north and should have stuck by the river, I’d go back. Otherwise, the tarred road will swing back again somewhat towards the river but on reaching the sharp lefthand bend you must leave it and head across country to relocate The Way at a ladder stile and then down to Saur Bridge, or you’ll be heading due north back to Garrigill. This all happens on the join of two NTG map pages (125 and 122). See what I mean about following the book backwards?

As so often I found navigating through farmland more of a problem than on the high tops. South to north the path down into Middleton is a follow your nose job but north to south the same path up from the same town seems vague and hard to find. Trudge quite a way out of town uphill along the road until you find the obscure right turn behind the old railway cottages. The Pennine Way is not signed here but comfortingly it is at the awkward gate just a few yards along to the left. You then need to head up higher than you think, keeping Kirkcarrion quite far away to your left and picking up a clear track across the shoulder of Harter Fell where you’ll find this gate (below). 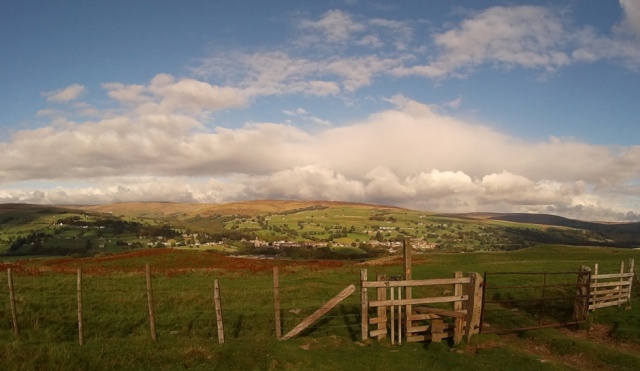 Looking back down to Middleton from the shoulder of Harter Fell. The Way passes through this gate.

I found Thringarth Pasture confusing too (NTG p. 112). I turned left too soon at about 924 232 which brought me down to the B6276 too far northeast at Carl Beck. Walking right along the road then down left into Lunedale was an easy enough correction, but you feel a fool.

I wriggled from my tussocks like a lugubrious newt; it had rained heavily and the Stealth tent’s condensation problems had been raised to new and sublime heights by my camping in a marsh, by a large river and at the head of an awesome and spraytastic waterfall. Truly, Cauldron Snout is a campsite for amphibians. Anticipating the ‘scramble’ I stowed my poles and bumped down the half dozen big steps on my bum. Seriously, this ‘scramble’ is nothing to worry about, and I’m terrified of heights. I’ve met people the first halves of whose Ways have been blighted by fear of it. Their second halves, after nipping up or down it in the ten minutes it takes, have been blighted by fury at the hyperbole of guidebook writers.

Cauldron Snout from the infamous ‘scramble’.

More striking than the scrambling was the fact that as I descended, so did the temperature. I’d say the bottom of the Snout was a good five degrees colder than the top, maybe more, and even damper. If you must camp at Cauldron Snout definitely camp at the top, other than in high summer. Falcon Clints was tricky as always and my cheery companion the Ring Ouzel was long gone, it being October. Dippers, though, were everywhere, far more visible and active than they’d been in June, chasing each other about and calling like the clappers; the adults ejecting this year’s youngsters from their territories, I guess.

Once I’d got over my depressing error at Widdy Bank the route was straightforward. My biggest concern was to take advantage of any scraps of sunshine to air my sleeping bag as soon as possible, as dark clouds were developing on the horizon. In June there’d been no fruit on the poorly Junipers but this time I found one female bush just south of the quarry on which there were, curiously, two generations of berries, some ripe, others green. I tried some of the ripe berries and found the gin flavour unexpectedly subtle, set off by a surprising sweetness. 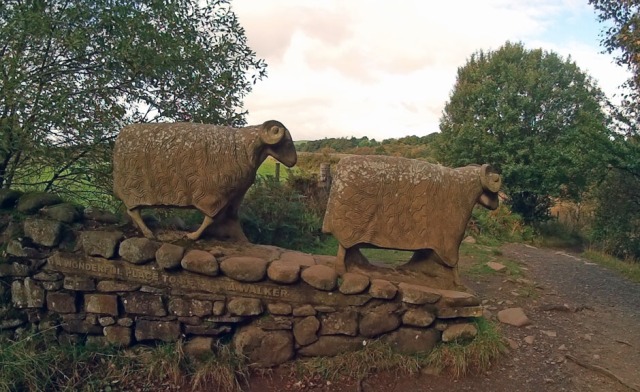 I nearly broke my leg trying to take a selfie with these sheep!

After a surreal discussion of the food hygiene status of black pudding (RTE or NRTE?) in McFarlane’s I bought pretty much a full set of their delicious pies. Consequently I had some trouble closing my rucksack. The lovely ladies of The Conduit charged my phone and water bottles and didn’t bat an eyelid when I arrayed an entire tent over the chairs and tables of their delightful upstairs dining room. Not in front of me, anyway.

Once you leave the honeypot of Teesdale and the fleshpots of Middleton and get up towards Harter Fell, The Way becomes lonely and atmospheric. Kirkcarrion seems to watch you like the eye of Sauron, the walls and buildings are neglected, this feels like an edgy, marginal neighbourhood. Its denizens are sparse and uncommunicative, its Wayfarers even fewer. One, in fact. And yet, these are not entirely ungroomed, unmanaged places. Grassholme has been dolled up for recreation with a car park and a loo while the famous flower meadows of Birk Hat seem generally well cared for.

It was striking though how many of the beautiful stone houses had been for sale in June and were still unsold in October. Maybe living the Lunedale dream is more challenging than was anticipated. Several times on The Way I greeted locals with ‘lovely place to live’ or similar only to receive in response a dour exposition of the lonely rigours of a Pennine winter. 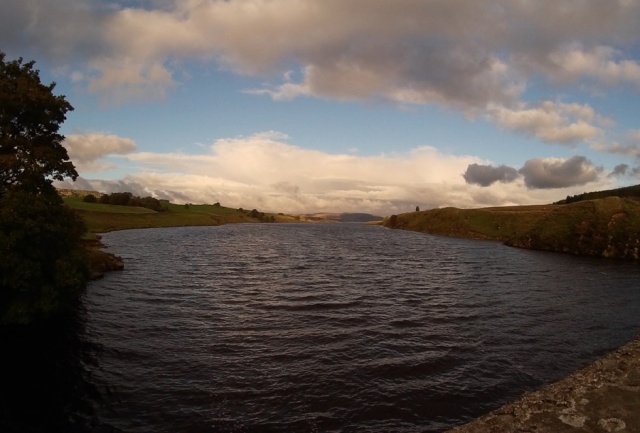 Another possibility is that dalesperspons in these parts are driven Luney by over-consumption of the magic mushrooms that were sprouting freely from the abundant cowpats. I resisted the temptation to pick a few to enhance my bedtime cocoa as I was planning to sleep at Ravock Castle stone circle. I figured that would be quite weird enough.

Showers visited briskly, then the clouds rolled apart. Between rainbows I was able to hang my sleeping bag out of my rucksack, a section at a time, and walk along with it airing droopily behind me, like a bright red caterpillar’s tail. I didn’t make it to Ravock Castle; as dusk fell I was exhausted and still a mile short. Among rushes at Race Yate I found a level and even dryish campsite that seemed a miracle of convenience after last night’s semi-aquatic tussockation. It was dark by the time I got the tent up. I ate pies, damply. From Deep Dale below me cattle groaned and bellowed hideously, as if being tortured. All night.