…in which I clamber through the cosmic portal, develop a sudden interest in Elizabethan history and find myself a Schilly campsite.

Byrness to The Schil, 20 miles. Jump to Journal.

Famously, none. It is possible to get from Byrness to KY in one day. In fact my twentysomething Forest View roommate did just that on this very day, despite rising later than I did. But then he’s from Switzerland – no, really. Even Spine Racer Damian Hall admits the idea is for ‘nutters’. It’s certainly not for the average Oldie. If I’m honest, I found these 20 miles a teeny weeny bit of a struggle, and I left Forest View at an enthusiastic 4.30 am.

It’s worth getting up early…

So, we need to split the day – how? A popular option is to take advantage of motorised transport deals offered by accommodation providers, such as Forest View. By pre-arrangement, obviously, ‘Joyce’s Taxi’ (it’s actually written on her car!) will pick you up from Clennell Street or wherever, whisk you back to Byrness for more of Colin’s ale, then take you back up there the next morning. Providers at KY offer a similar service.

It’s also possible to walk off The Cheviot to accommodation; this situation seems to have improved in recent years. You’ll need to research around for up to date information. If all else fails some of the more dynamic providers have placed adverts in the refuge huts and there is, implausibly, mobile signal across much of the massif – I was on Facebook from both The Schil and Lamb Hill. Personally I just sleep out, obviously, as I carry a tent. 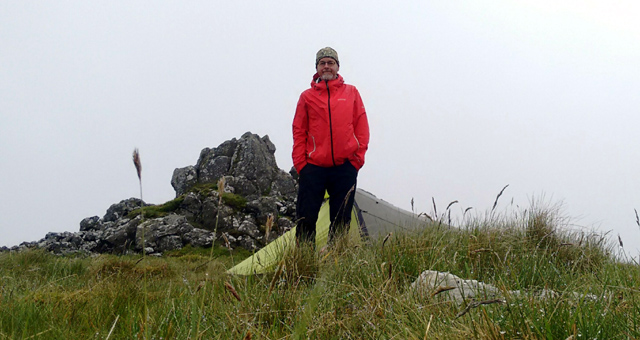 Wild camped on the summit of The Schil.

Even without a tent The Cheviot has (or at least had in October 2016, check locally) two huts. One is at the wonderfully-named Yearning Saddle below Lamb Hill at about 805 130, the other down on the saddle between Auchope Cairn and The Schil at about 879 201.

These huts are thoughtfully positioned to split the walk in either direction but they are not proper bothies like Greg’s Hut, just wooden emergency wind and rain shelters. The benches are narrow – you will probably fall off in the night – and the huts are small. Anything more than four sleepers would be very intimate. In theory they may be fully occupied when you arrive, although on three PWs in April, June and October I’ve never personally met another soul in either, mind you, I keep odd hours.

However at both huts there’s a bit of flattish ground to pitch a (small) tent for a better sleep in all but extreme conditions combined with the pleasure of cooking and eating in a full-height building that isn’t flapping in the wind like an epileptic pterodactyl. The huts are wooden so cooking in them carries an extreme fire risk – be very careful. Never leave litter in a hut, nor human waste anywhere in its vicinity, crikey, this should be obvious to everybody but it clearly isn’t – grrrr.

‘Resources: none’ includes water. This can be a real problem on The Cheviot in summer, even if you have a stove or filter there’s effectively no flowing water beyond Chew Green. On The Schil I cooked my Supernoodles in bog water that visibly contained active life forms. Thankfully some stern boiling discouraged them, that or the vindaloo flavouring.

Famously, easy. Essentially you just follow the variably shonky fence that forms the unlikely looking border between our two great and ancient kingdoms.

Strictly speaking you don’t get to the actual border fence until the dip after Ravens Knowe at about 776 077 but even before that other followable fences are available. Confusingly this first bit of the border fence is the only bit you don’t follow, you continue on a little past it then turn right at about 777 080 (NTG p. 177) past Coquet Head to rejoin the border either at, or optionally above, Chew Green. 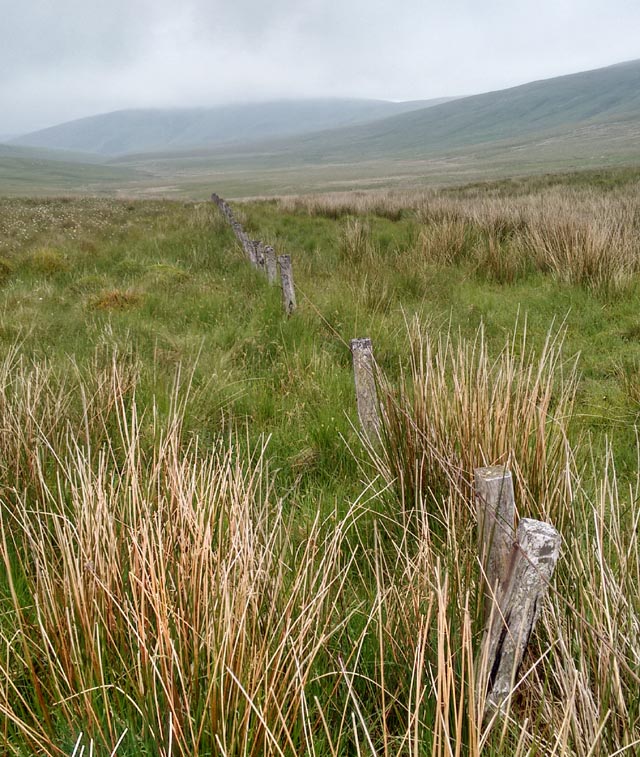 This particularly shonky bit of the international border along the Coquet is one of the few bits you don’t follow, but you’ll rejoin it soon aftwards at Chew Green.

Some of the boardwalks up here are extremely slippery when wet, but the most important caution on The Cheviot is not to wander off east or south into the military firing range. By the left – follow the fence! Don’t touch anything metal and don’t be surprised to hear firing or encounter military personnel.

Starting out from Byrness you don’t need to trek back all the way from Forest View to where The Way crosses the A68, just walk instead up the tarred access road to the houses and spot the fingerpost pointing through the incongruously neat hedge.

From Byrness village walk up this road to the hedge gap.

Given the wild and woolly reputation of The Cheviot, an early morning walk along a very busy A68 seems incongruous. In my case at dawn, a walk just for fun along the middle of an empty A68 seemed doubly odd. Even odder is the first bit of climbing, through a neat hedge and past various back gardens. By the end of the Wayfaring season this steepish woodland walk will be very muddy; it wasn’t too bad in June. You simply climb by the shortest and most direct route, which makes a nice change on The Way, until you encounter an encouraging and informative sign at a tumbledown gate.

This gate is the cosmic portal onto the legendary Cheviot Massif, which then almost immediately reveals itself as self-evidently awesome. Or foggy. Or both. If you’re lucky with the weather this will be one of the most amazing days of your life so, seriously, set out at dawn and savour it, don’t rush.

Apart from anything else, if you’ve walked all the way from Edale and you’re in your late fifties, believe me, you’ll be getting a tad cream-crackered by this point. You’ll be passing over a string of atmospheric summits, each ideal for a spot of soggy relaxation and windy reflection, and not just as a consequence of Colin’s ale.

Byrness and Houx Hills were wonderfully sunny and the views back over Redesdale were fantastic but by Ravens Knowe I could see some authentic Scottish weather gathering prior to its imminent export southwards. Think on’t – had I not virtuously risen at dawn I’d have missed the best part of the day. After a brew and some Bellingham buns at the Yearning Saddle hut I trudged in fog (what did I do? I followed the fence) all the way to Windy Gyle, where I had a bit of a wobbly moment halfway up the steep ascent. After a sit down and a Snickers I made it to the summit. The clouds suddenly and miraculously swung aside like theatre curtains and the views were stunning.

Windy Gyle is my second-favourite Cheviotette after The Schil, it’s full of spirit and redolent with history – the cairn is supposed to be seriously ancient. It’s called Russell’s Cairn and guidebooks will tell you that’s because a Lord Francis Russell was murdered here in 1585. I’ve seen Pennine Way blogs sporting a portrait allegedly of this eponymous aristo. Sadly, it tends to be the famous and widely Wiki-available engraving of his Dad.

A bit thoughtful at Russell’s Cairn, and not just about Elizabethan history.

Extensive research taking an entire twenty minutes has revealed to me that Lord Francis Russell, the 2nd Earl of Bedford 1527 – 1585 was a soldier and statesman prominently and lucratively in the service of Elizabeth I. His third son, imaginatively named Lord Francis Russell (1554 – 1585), became his heir after the deaths of first Lord Edward Russell in 1572 and then Lord John Russell in 1584. I hope you’re following this.

It was this younger and initially insignificant Lord Francis who was sent north to serve an apprenticeship in management science, political theory, agricultural economics and extreme violence as MP for Northumberland and one of the border wardens. In this capacity he became fatally embroiled in the vicious feuds over not only control and taxation of legitimate international trade but the even more enriching smuggling and stock rustling. He was indeed fatally wounded at a parlay on The Cheviot although this didn’t take place actually on top of Windy Gyle but more sensibly at the nearby border crossing. He died a few days later.

Oddly enough, his father coincidentally expired just hours afterwards in London. There will have followed anxious correspondence concerning the exact times of death, insofar as they could be established in the sixteenth century, as they determined whether yet another Lord Edward Russell, aged only 13, became the third or fourth Earl. He made the podium as third in the end, and his heirs remain, of course, one of England’s most fabulously wealthy noble families. You’ll thank me for this information when you get to Windy Gyle, it will enrich your visit. No, seriously.

At the fence junction I debated with Northumbrian friends on Facebook whether I should bother with The Actual Cheviot. ‘It’s just a round heap of peat’, I was reminded from a back garden in Alnwick, then from an office in Hampshire ‘we went up there in 1983, remember me wringing my jeans out?’ I gave it a miss and succumbed instead to more memories, of a snowy 1999 when I’d slithered down from Auchope Cairn through knee-deep drifts to the hut. As I was brewing up inside, a genuine and quite scary blizzard had roared down from Scotland and decided to perform a little blizzardy ballet around my fragile shelter.

The hut moaned and shook, I tried not to. ‘I think I’ll kip in here’, I thought, piling on every stitch of clothing, and drifting off to sleep. Woken an hour later by bright sunshine through the tiny window I peered out. Snow had drifted around the hut to waist deep and the tips of the spindrifts had frozen to crystalline points that glinted in the low evening light. As I gathered snow to melt for my Supernoodles (I like a varied diet in the hills) a small flock of Snow Buntings paid a call, twittering and hanging bouncily in air frozen to a liquid stillness. They looked like tiny puppets suspended above a spotlit stage. ‘Blimey’, I thought, moved and amazed, ‘you need a lot of snow for a small pan of Supernoodles’.

So here I was in June 2016 back at the same friendly hut, on a sunny and snow-free summer evening but exhausted and down to my last three Snickers bars. I was determined to make it up The Schil and camp there, again because of a memory from 1999 when I’d peeped out of the very same hut the following dawn and found the overnight gale had smoothed and thinned the snow. Off I’d scuttled before more weather arrived, and somehow I’d seemed to get up The Schil in no time at all – younger and fitter, I suppose.

On the summit an amazing thing had happened. As the morning sun had risen over The Actual Cheviot to the east, the snaggle-toothed shadow of The Schil had careered from right to left across misty Scotland far below. Now in 2016 I was hoping to see this incredible and strangely moving sight again, so off up The Schil once more I stumbled and it seemed, this time, to take blooming forever. Not only that, after the hut there was absolutely nowhere suitable for camping. Everywhere was soaking wet and/or acutely sloping and/or covered in tall, tough heather. My heart sank, this seemed like a very Schilly idea.

When I finally dragged my increasingly lame carcase onto the summit, lo and behold right on the top there was a perfect spot for camping. The weather was benign too, intermittently even sunny and with extensive scotch views. I got the tent up, ate some alarmingly biodiverse but reassuringly highly-spiced Supernoodles and fell into a deep sleep.

Disclaimer – summit camping is only for hardy folk with good gear. And me.