…in which we’re parted by feet that hurt then party in a field of yurts.

I had a lazy and superb full English at The Board and easily got to Keld by teatime, but you’ll need to plan what you’re going to eat once you get there. Most catering in that small remote village needs to be booked and there’s no mobile signal in upper Swaledale. If aiming further you’ll need to start earlier with a picnic breakfast as well as lunch from one of Hawes’s many shops, such as The Spar on the High Street. This has an amazing selection of groceries and deli foods, including the legendary and unmissable mince and mushy pea pie, one of the best pies on The Way. Ginger pop as well, what’s not to like? 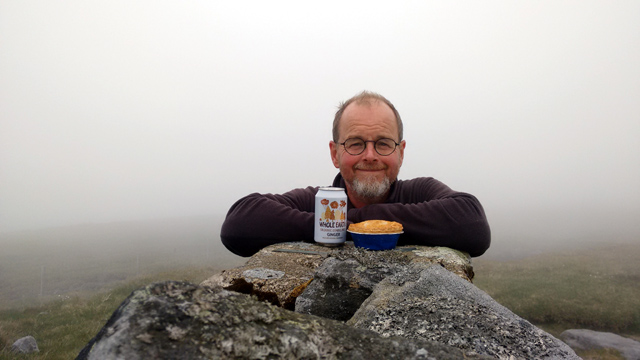 The legendary mince and mushy pea pie in its natural habitat on the summit of Great Shunner Fell, which is famous for extensive views.

A possible alternative for breakfast is the tearoom at Hardraw, but when I got there it was only just opening and food options were limited – basically just ice cream. This was in fact a welcome refresher after a boozy night in The Old Board. There was coffee too, thank goodness. 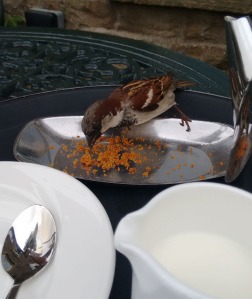 If you scuttle over Great Shunner, lunch at the lovely and not over-priced Kearton Country Hotel at Thwaite is an option. They did cooked meals between 12 and 4 and teas and snacks until 4.45, I’d check in advance out of season. I found a summit picnic very welcome, then afternoon tea at the Kearton with their famous homemade ginger cookies was perfect.

Resources at Keld wax and wane, the former YHA hostel is now Keld Lodge where you can stay and they do some evening meals but for limited numbers and only with booking, or so I was told by fellow-campers who’d been turned away. Confusingly there’s also Frith Lodge, a BnB. There’s camping in the village, a public toilet and some kind of minimal community cafe/shop but check online for up to date details. We camped upriver at Swaledale Yurts which despite the extra walk had advantages, notably excellent hot meals (if pre-booked by 6 pm and there’s no mobile signal in Swaledale), wine and cold beer. They also had hot showers, an under cover campers’ kitchen and a hot tub (!) You can of course also stay in a yurt, if that’s your felty bag and you’ve booked in advance.

To get out of Hawes cross either of the two bridges towards the east end of town then cross the road and head off left (northeast) along the road signed The Upper Wensleydale Business Park. A vintage Pennine Way fingerpost lurks unobtrusively above this sign.

Leaving Hawes northbound The Way goes left at this junction. Photographed in October. 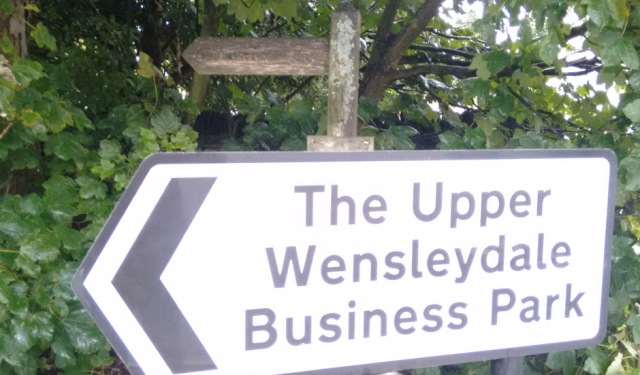 The first footpath to Hardraw probably works perfectly well, however The Way is the second footpath further along. 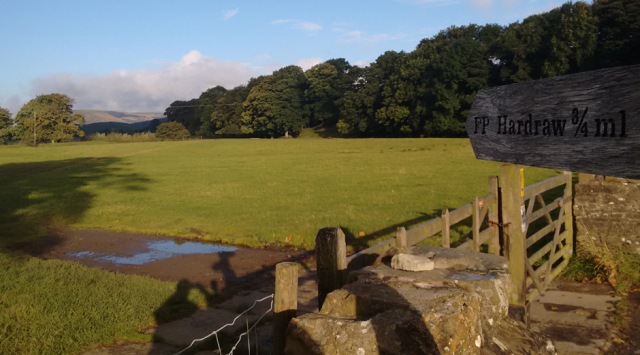 The first footpath to Hardraw is not The Pennine Way, although it would probably do. The Way is further up the road immediately after the trees. Photographed in October.

On leaving Hardraw turn right immediately after what looks like an old school, but which now seems to be a Mountain Rescue base. I found the route up and over Great Shunner entirely unconfusing despite thick fog, it’s intermittently flagstoned too. 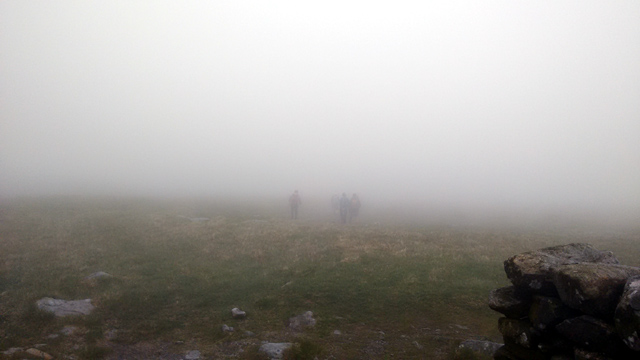 Did I mention that Great Shunner Fell is famous for extensive views?

Heading out of Thwaite don’t miss the vital left turn at the stile with the obstreperous notices. Follow the fingerpost away across the field, crossing the stream through the gap in its line of trees and then climbing quite steeply along the wall up to the Kisdon path. If you find yourself walking through flat and flowery meadows (la la la, hello flowers, hello sky) and over more narrow stiles daubed with behavioural admonitions, you’ve missed the Way and should go back. Especially if you find yourself at the Usha Gap campsite which means you’ve gone in totally the wrong direction. Who would do that? Oops… 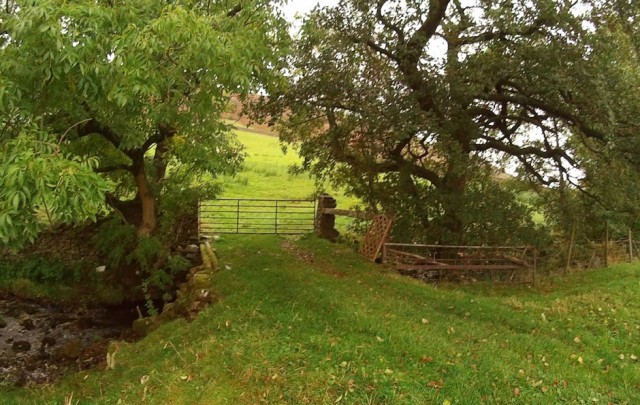 On leaving Thwaite, turn left and walk across the field towards this gate. Taken in October, hence no flowers. 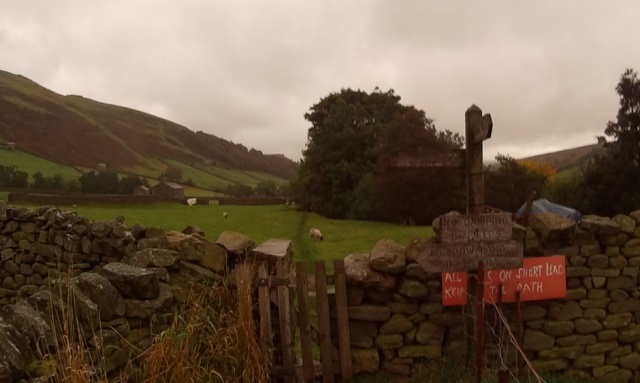 The stile with obstreporous notices. The Way turns left here across the field to the gate (above) and thence to Keld. Photographed in October.

Even if you’re entranced by the summer flower meadows ahead, don’t miss this sign to Keld! Taken in October, hence no flowers. 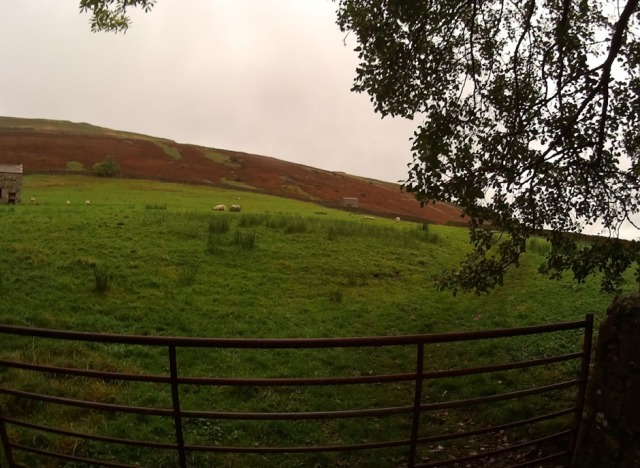 The Way heads quite steeply up to the corner of the stone walls, then turns right towards Kisdon.

At Kisdon you do need to go left through that closed gate, rather than straight past the cottages. The path becomes very rocky from this point and it will take longer than you think to get to Keld, where The Way doesn’t actually go into the village. To stay overnight at Keld go straight onwards and slightly upwards at the path junction (below). The Way itself turns right here and heads down a clearly signed, constructed track to its river crossing in the wooded dale. That vague unsigned grassy track downwards which you passed just before reaching this junction was not the Pennine Way. Oops. 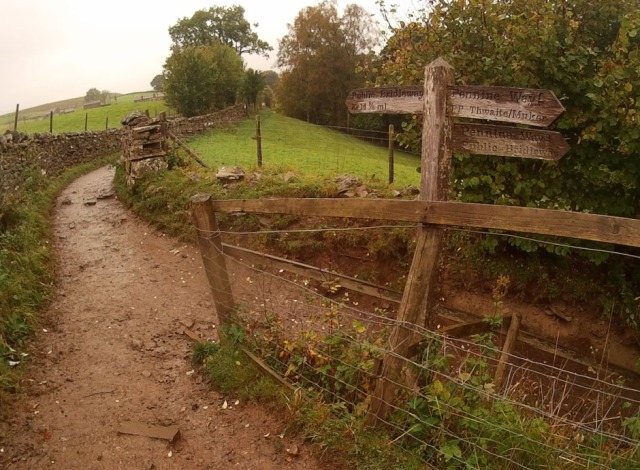 Keld village straight on, Pennine Way to Tan Hill down to the right.

They don’t make getting out of Hawes easy, what with having to spot an invisible PW sign, squeeze through pack-unfriendly kissing gates and dodge traffic, but finally the path to Hardraw winds off through meadows that in June are a mass of buttercups, the first of the many amazing wildflower spectacles you’ll encounter throughout the northern dales in early summer. Halfway along, an apologetic sign notified walkers that the field was soon to be sprayed under a temporary derogation of conservation rules for excessive Creeping Thistle; I wonder how many buttercups there’ll be next year. 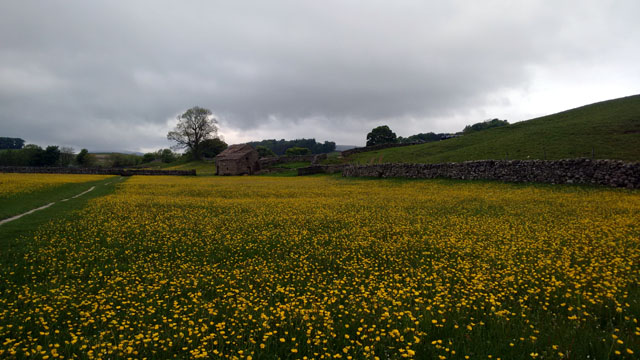 The Way up to Great Shunner Fell, famous for extensive views, was uneventful. It just got foggier and foggier and windier and windier. There were no views. GSF is one blowy place, although there is a small summit shelter that makes picnics, erm, a breeze. 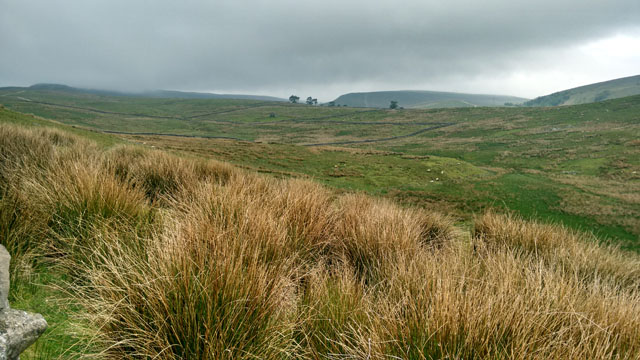 Which hill is Great Shunner? Ah, the one hiding inside that cloud.

At the top of the drove road down to Thwaite I had great views of a female Ring Ouzel gathering food for her chicks. Then, after reviving tea and a spot of sparrow feeding at the always-welcoming Kearton I wandered dreamily through the legendary meadows of Swaledale, marvelling at their floriferousness. Except that I shouldn’t have even been in them. I should have noticed the reminder I’d carefully copied out of Wainwright into my vintage NTG and gone uphill to the left instead.

Once you reach the high path the flowers are just as pretty and if anything more interesting, but negotiating the rocky track takes most of your attention. By the time I got to Keld it was roasting hot and every septic tank in the village was being emptied, I had to squeeze my pack between a stone wall and an equally immovable and extremely aromatic sewage truck. 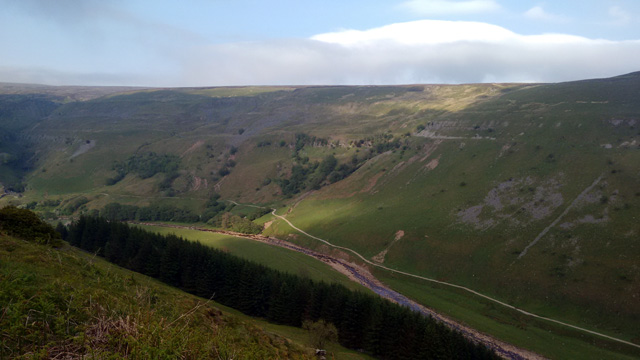 Swaledale. The Coast to Coast, which is apparently some kind of ‘long distance’ walk for beginners, is safely down in the valley.

None of the locals had heard of Swaledale Yurts, a recently new venture. There were no signs and no phone signal, so I had to guess the way, which I should have properly researched. I was greatly relieved after a surprisingly long hike out of town to spot some large white felty-looking blobs in a riverside field. Also to spot my companion, who’d been forced by the dreaded blisters to ingeniously find her own way from Hawes via a complex succession of rustic buses. Even more ingeniously she’d ordered on my behalf from Swaledale Yurts’ energetic and kindly young proprietors a large plate of hot and tasty chilli and a large bottle of cold and tasty beer. Once located, this is a lovely place with a friendly, funky vibe; I recommend it.

Our fellow-campers were mostly Coast-to-Coasters of many nationalities, sizes, ages and social configurations, not to mention species – a large, weary-looking hound seemed very underwhelmed by long distance walking as a leisure choice. Several people had shocking blisters. Two groovy girls in all-new gear, Coast-to-Coasting for some obscure charity, were greeted by an extensive motorised support crew of excitable family and friends, doling out not just clean lingerie and vital hair products but the most extravagant hugs, affirmations and praise, as if the kids had miraculously walked across Antarctica. A Wayfaring Oldie kept quietly out of the way, and ordered more beer.