…in which we eat a heap of food, see the Teesdale fields in bloom and are pleased to reach our room. 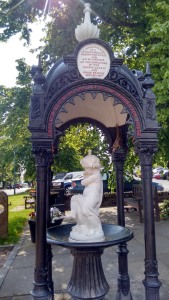 The old drinking fountain at Middleton

In both June and October 2016 there was a portaloo at the Grassholme reservoir car park 929 215 (it was still there in September 2018). There’s another public toilet with hand washing at Middleton, which has diverse eating and shopping. This time we confined ourselves to the Co-Op as the sunny day was perfect for a picnic on the bench by the quirky old London Lead Company drinking fountain. This no longer works, so you’ll have to buy water from the Co-Op too, although The Conduit Tea Rooms will fill a customer’s bottle and does takeaway hot drinks as well as cans etc. Remember to stock up for the next two days. There’s more about the recommended Conduit and McFarlane’s butchers (great for pies) in my Pennine Way Blog 2. (September 2018 – the Conduit has changed hands and been renamed The Tees’pot! It was closed by the time I got there but pie and chips was still on the menu).

Langdon Beck Youth Hostel, small, quiet and very traditional, is a classic Pennine Way stopover but these days walkers can no longer rely on being able to walk in and bunk down, due to the YHA’s ‘exclusive booking’ wheeze. This can cause the whole place to selfishly be occupied by dog in the manger townies who don’t want some hiker’s hairy backside anywhere near the same loo as their delicate little urban posteriors. Get your Wayfarer’s a*se booked in there, I say. There was no WiFi (although they have Internet and may kindly send an e-mail if not busy) and the only mobile signal was Vodafone, which has an aerial on the roof. There’s also a small hotel at Langdon Beck and I saw a rather minimal sign at Saur Hill farm offering camping (in September 2018 this sign was even more minimal).

Straightforward. The path down to Middleton is a vague but the town and hence the overall direction are obvious. After visiting the town you need to re-cross the bridge and find The Way off to the right just past the livestock market; note the fingerpost just before it on your way in. Don’t forget to cross the Tees at the large bridge below Cronkley farm.

It’s further than you think to Middleton, at least that’s what my companion kept reminding me as we plodded in dutiful single file through some of England’s most beautiful flower meadows. We were perhaps a week too early for their full glory, the Yellow Rattle was just coming into flower; at home in Norfolk ours was already in full swing when we’d left. A surprising number of the gorgeous stone houses and small farms were up for sale, not least Clove Lodge of course. 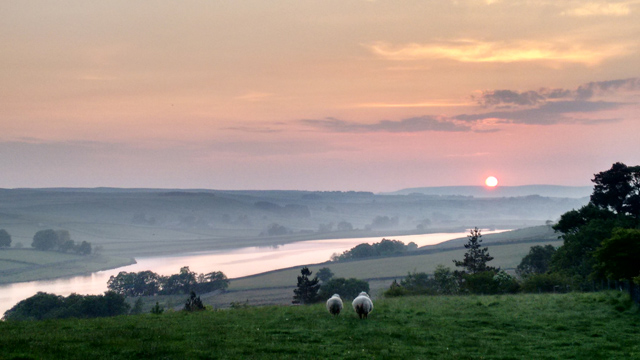 Dawn at Clove Lodge. Come to think of it, I could probably have sold this photo to an estate agent.

Kirkcarrion to me seems an implausibly gothic, romantic and atmospheric place; wild camping there is on my bucket list. The alleged extreme hauntedness of this supposedly ancient burial site may have something to do with its striking and ubiquitous visibility. Legends of a place can easily be extended and embellished when passing through its zone of influence takes a very long time. ‘I think I’ll go and lie down there right now’ said a certain person, sunk into blistery weltschmerz after being dragged from a cosy bunkhouse and back into her painful boots at dawn.

In sunny Middleton we gorged ourselves on bargains. Co-Ops have the most generous reduced item policy of any supermarket. It’s also striking how in so many small northern towns they provide the only opportunity to buy daily rural essentials, you know, hummus, aubergines, pains au chocolate, EV olive oil, blooming awful Ainsley Harriot couscous, etc. Distracted by the Co-Op, we sadly failed to realise that there are more, and more local, shops in the opposite direction i.e. by turning left instead of right. 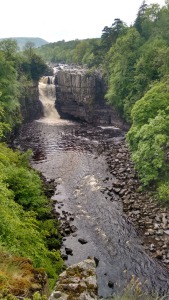 ‘Let the floriferousness commence’, we cried, happily bun-stuffed and pie-revived, and suddenly there they were, the famous meadows of Teesdale. It was surprising how may Bluebells were among them in full sunshine, in Norfolk we think of that as a woodland plant. I suppose the soil is very damp; either that or the conservationists bought the wrong seed mix. I’m laughing nervously here, as I used to sell conservation seed mixes.

It’s quite a long hike until you finally encounter the Tees itself, but when you do it’s as gorgeous as advertised although its Dippers are elusive in June, too busy breeding. Elusive too were the Globeflowers but just as we were gloomily concluding it was too early for these treasures to have bloomed, there they were, not exactly trollyloads of the mysterious and legendary Trollius but at least some of them, the Golden Globes of the British riverside flora. Then we saw a stunning meadow of what must have been hundreds of thousands of orchids, edged with the deep pink of Lousewort, that interesting semi-parasitic rattle-relative.

Some aspects of Teesdale were a bit depressing: the poorly Junipers, the ugly quarry, the health and safety signs (evidently a pointless intrusion as yet another teenager drowned here a month later), the sad local birders bemoaning the lack of raptors on the fells – I wonder why. But more positive forces are also at work, funding meadow management, maintaining paths, installing wacky sculptures and touchingly providing boot disinfectant stations to try and save the poorly Junipers (Google Phytophthora austrocedri to learn more). 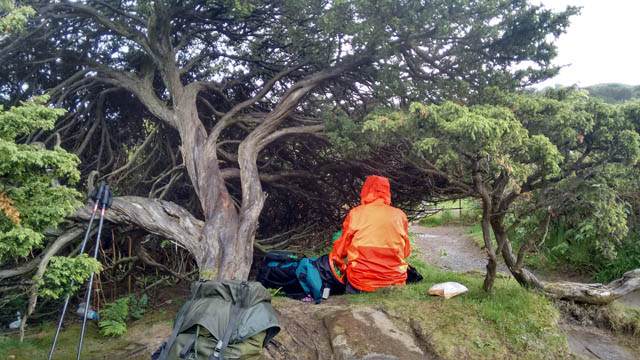 A very wet picnic under the poorly Junipers

Teesdale encapsulates the many dilemmas of a beautiful but accessible piece of countryside whose cultural and ecological significances are at the mercy of its economic and recreational importance. In a democracy, popularity means survival, at least in some shape or form, so it was nice to see numerous locals ambling through the heavy thunderstorms in shorts and flip-flops, as Norfolk folk stumbled along in Goretex and boots.

Binoculars are useful at Langdon Beck to work out which building is the Youth Hostel. It lies directly on the (fortunately quiet) road and was run by a cheery young woman doing a good job of fostering a warm and friendly atmosphere, despite sparse occupancy. Laundry was our priority, followed by a hot meal. This was decent in quality and a friendly sociable experience to boot, but somewhat meagre in quantity in line with current YHA policy. Luckily we’d packed extra buns from Middleton. There were the usual suspects, the serious German cyclists, the Australian dad and lad hikers looking for more beer, the old oddly-dressed spooky guy who seems to live in hostels, the earnest home-schooling family, the recently-retired couple trying to get out more. Oh, that was us.

Cronkley Fell from the hostel window, a bit scandi-noir, we thought.

Conspicuously lacking were youths although there was one willowy twentysomething with long pretty hair, bless him, who’d retreated into the contemplative, self-interrogative catatonia that settles onto solo Wayfarers who’ve made it this far. Recognising this from my own 1999 effort, I confined my communication to what I hoped were supportive smiles but which probably just made me look weird. My partner with her usual intuition and empathy achieved a brief conversation on their mutually-interesting topic of blisters, discovering that his were so bad he was planning to rest up at the hostel ‘until they healed’. I refrained from sharing my experience of what, barring a miracle of barefoot medicine, might be the likely timescale for this.