…in which I’m pampered with a pie feast, angered by the sign police and camp among the wild beasts.

None until Calderdale, at which point one wrestles with the decision whether to divert into Hebden Bridge. I’ve never felt the need, because of May’s Shop. It’s a long, steep climb up from the A646, in 1999 I had to scrounge water from a friendly gardener. This time I remembered to get a bottle filled at The White House. There’s river water (and a gorgeous picnic spot) at Colden Clough (968 283, NTG p. 59) but I don’t drink from watercourses below farms and by then May’s is not far away.

May and her shop are legends of The Way and a must-visit despite the small detour off to the left along the road at High Gate (964 288, NTG p. 59). Where The Way crosses Edge Road there’s a slightly decrepit sign. Stop at May’s for brunch (bearing in mind the Pack Horse Inn ahead) and to stock up. She has pies which can be warmed, cakes including superb parkin, hot and cold drinks, ice cream, an incredible assortment of bottled beers (and an opener) and a cornucopia besides. In May 2016 she was open between seven and nine, seven days a week, if the door’s shut you just ring the bell. 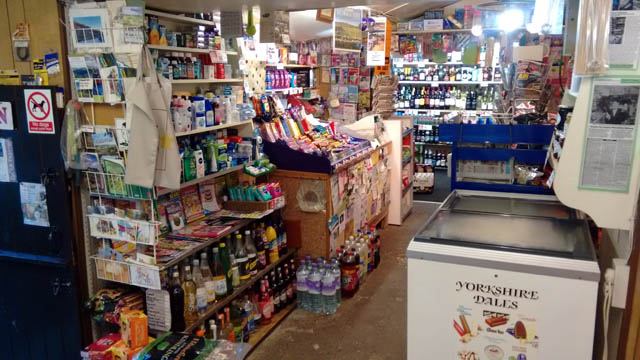 One end of May’s legendary shop.

Day Three is quite lavishly resourced, so you can stop feeling hungry and sorry for yourself. From now on your problem along most of the Pennine Way will be resisting food and drink rather than finding it. Crossing King Common you’ll see over the far distant side of Graining Water what looks like a small farm. You’d never know it from The Way but the building nearest the road at the northeast end of this complex is actually a wonderful pub, The Pack Horse Inn. Just after you climb up from Graining Water there’s a short cut off to the right from The Way at 948 315 (see NTG p. 60). Visit this pub, if only for a pint. And for the extraordinary food, the open fires, flagstone floors and lovely people. And the amazing display of home-made cakes in the porch. And because the owners have been there for 27 years and are getting on a bit, so who knows how much longer it will stay so wonderful?

One way or another your beer kite will whisk you up to Top Withins where some claim there’s a shelter. In 1999 it was indeed possible to enter a dark, damp stone lean-to. In May 2016 I forgot to investigate but when I got there again in freezing rain in October 2016 the door was firmly locked, so don’t rely on it. (In September 2018 it was open again and rainproof but draughty). In 1999 I camped at Upper Heights Farm but that jolly, simple campsite beloved of so many Wayfarers has now also closed.

I pressed on sore-footed to Ponden and, turning right on arrival at the reservoir, camped at Ponden Mill (999 373). The campsite was just a minimal patch of sloping riverbank but there was a nice hot shower in a portakabin. At no extra charge and just out of friendliness they did me two very kind favours, which I’ll keep to myself to avoid creating unreasonable expectations. These are helpful, kind folks.

The main reason I camped here, despite it being slightly off The Way, is that at Ponden Mill one’s tent is but a short, easy stroll along the road from the Old Silent Inn, a legendary temple of ales and gastronomy. Unfortunately on a Bank Holiday Monday their famed gastronomy ceases very early and I got there just too late. They rustled me up the last portion of homemade chips from a closed kitchen. Very good chips they were too, but try and do better research than I did as the food here is supposed to be awesome and it’s a lovely pub. If you’re so inclined (and financially resourced) you can stay there in sybaritic BnB luxury. (In September 2018 there was a campsite at Ponden Guest House which is directly on the Way)

Straightforward at first as between Warland Reservoir and Withins Gate The Way is extensively flagstoned. At 955 214 be alert not to be drawn onto the more obvious lower track off to the northwest. The Way carries on around the end of the reservoir then follows the obvious Warland Drain away from it north-northeast.

Don’t turn left too early here. The Way continues further around the northern tip of Warland Reservoir before turning off along the obvious drain. Photographed in October.

I walked in thick fog all the way to Stoodley Pike, which I couldn’t see at all. I just followed my nose and the obvious track.

This what I should have seen! Photographed in October.

In Callis Wood at about 978 265 there’s a short cut downhill through the trees. A Pennine Way fingerpost points back uphill but there’s no corresponding sign pointing downhill (October 2016) hence it’s easy to miss.

The Callis Wood shortcut heads down to the right. Photographed in October.

Higher Underbank can be confusing but the NTG directions are OK, I’ve never tried the Wainwright alternative. The track around the Walshaw Dean reservoirs is signed and obvious, the track over to Top Withins is flagstoned, but don’t miss the left turn after Lower Heights. Halfway down to Ponden there’s a wiggly bit through buildings, just head downwards.

I dozed off at Light Hazzles Edge in warm sunshine, but when I awoke it seemed windier and cooler. I could hear a strange spitting, sizzling sound. Looking out eventually and sleepily I realised it was the electricity cables spluttering quietly to themselves in the thick, wet fog. My campsite had been perfectly and deceptively sheltered, but as soon as I got back up onto the track I was battered by a cold northerly wind. With sleet in it, on the last day of May. It was perishing, I was glad of overtrousers and gloves. Stoodley Pike, normally an obvious landmark for miles, was invisible until I stumbled upon it, after a breezy breakfast at Cyril’s Seat, which is normally a lovely viewpoint, hence the seat.

At Dam Hey I met an elderly chap losing his wrestling match with a windblown map. ‘I always fancied paragliding’ he shouted above the bluster of the gale and the crackling of free-range paper, ‘which path is the Pennine Way?’ ‘See those cows up there?’ I said, ‘they’re standing right on it’. I grabbed a corner of his map, which was flapping like a furious fruit bat, and together we bludgeoned it into submission. He packed it away and strode off, emboldened by his bovine target. Looking belatedly back, I realised that while we’d been splicing the mainmap like a pair of ancient mariners the cows had ambled off The Way. Significantly.

At Lower Rough Head, a Cold Comfort farm if ever I saw one, the gesticulating proprietor temporarily engaged me as a volunteer supplementary sheepdog. After standing in strategic gateways and waving my poles vaguely but usefully, I hope, at assorted woolly delinquents I received the wave of thanks that passes for remuneration in such a capacity. I’d been hoping for at least a Boneo.

As I was bracing myself for Lower Underbank a local emerged from his house. ‘You’ll be alright’, he said, ‘I run up that every day’. ‘I’m from Norfolk’, I explained. ‘Time you got some health into you then’. Thus encouraged, I stumbled up through the chi-chi cottage refurbishments of the Hebden Bridge poets and professionals, with their Macbooks, incense sticks and dreamcatchers. I poetically swore that never again would I hillwalk in non-stretchy trousers; my knees were killing me.

Further inclines awaited, above beautiful Colden Clough a couple were resting. ‘Steep, eh?’ said the man. ‘Thanks’, I said, ‘I’d never have noticed if you’d not told me’. This lame rejoinder set them laughing merrily as if it was the funniest thing they’d heard all day. That’s why I love Yorkshire folk.

May’s Shop is a retail Tardis in a stone shed. As she sells until nine pm a staggering range of beers, wines, spirits and liqueurs you’ve never even heard of you could party on down at her tiny campsite if that fitted your schedule. Just be aware it’s an early-risers’ working farm and family home, and that the loo is down not one but two slippery slopes and very minimal. You might also be recruited to herd cows at six-thirty am, as I was when I camped there in October. Entertaining but not ideal with a hangover.

There’s a picnic table and if it’s wet she’ll probably let you lurk inside, although due to a stock control policy amounting to ‘overwhelming abundance’ and a hearteningly continuous stream of locals, space is tight. I enjoyed a late breakfast of a delicious steak pie, hot coffee and a bottle of Landlord while stashing similar reserves into my pack for later. I didn’t then know about the Pack Horse Inn – I only discovered that in October. 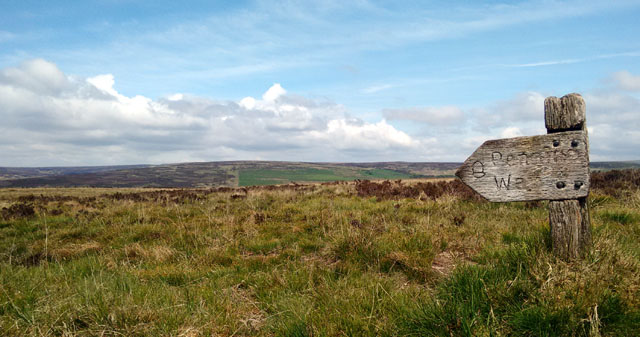 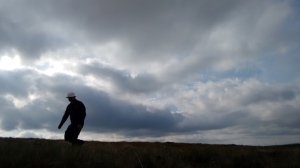 Me attempting to wuther, accidentally in a Happy Mondays stylee.

Top Withins is famous for its wild beauty and evocative atmosphere so of course it had tastefully been decorated with bright blue health and safety signs*. There was one at each corner in case you missed them, instructing us all to keep off the highly dangerous stones. Small children were gleefully clambering all over the advertised lethal hazards.

A party of cheery Japanese was approaching up the track in the gale and drizzle. Their cameras weren’t clicking as cameras used to but emitting a strange gamelan of beeps and pings, like a flock of assorted tropical fledglings. How wonderful that this strange, inauthentic pile of faux-heritage attracts folk and their faux-cameras from all over, hinting to them of the peace and beauty of the English hills.

Wild horse by campsite at dawn. There’s more behind the trees, including some tiny foals.

Ponden Mill is not the kind of Trumptonesque sailed affair we’re used to in Norfolk. It’s a large and alarmingly derelict textile factory with a vast stone chimney and an even vaster car park, formerly holding up to twenty coaches. This closed and collapsing former retail outlet has now been acquired for eco- and heritage-friendly restoration by a sweet and ambitious couple who’ve already made great progress. Ponden itself is a deeply strange place. Apart from anything else it’s inhabited by free-range feral horses.

These beautiful, slight and shadowy animals are subsidised with the odd hay bale and veterinary intervention but otherwise live and breed elusively in a family herd, as if wild. I was instructed to draw a pallet across the hole in a the wall that formed the entrance to the campsite, to prevent wandering horses from interfering with my tent in some unspecified but implicitly destructive manner. The refurbishment of the Mill was on hold as the male half of the worryingly small team had crocked his back. I hope he’s better as, from my own experience of fixing up a derelict rural enterprise, it looked like a challenging project. Nice people, I wish them all the best with it.

*I was pleased to see on returning to Top Withins in October 2016 that the ugly signs had been removed.